How can God allow such catastrophic events? – Roxanne 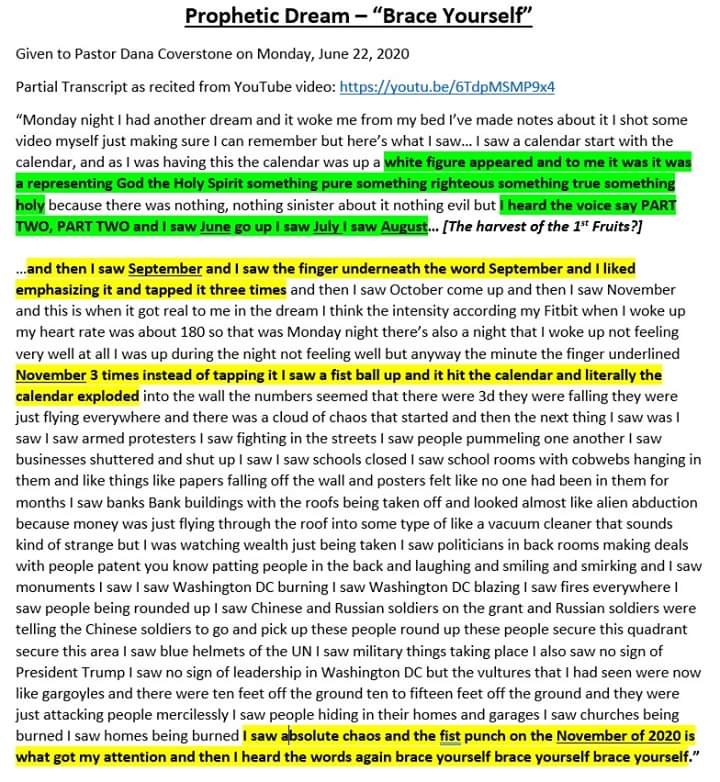 This is Dana Coverstone.  I’m a pastor. I’m a husband, I’m a father. I’m a patriot I love this country.

I can confirm the first part of what I’m about to tell you because I told some men at a prayer group back in December.  2nd or third week of December. I’m going to share three specific dreams that I’ve had recently. Going back to December.  Two that I’ve had this week both, both Monday and last night ( Monday and Tuesday night).

I believe number one they are prophetic.  The first one that I have had has come explicitly true based on the events of March to June, the month which we’re living.

I do not claim to be a prophet by any means. I understand though that some dreams and visions by their nature have a prophetic tendency to them. I do believe I’ve seen things. Both that have happened as relevant by the first dream that I had, and things that I’ve seen recently. So you can take what I’m about to say with a grain of salt, you can pray about it you can think about it.

Back in December I woke up, I had a dream. In that dream I saw calendar. Starting January 2020.

It was being flipped.  I saw January,  I saw February,  I saw March.  When March came up the hand held it and I saw the thing of finger underline the month of March, and the tap it three times.

So underline the month of March, tapped it three times.

So to me it was emphasis, something’s going to happen in March.

Then I saw , April, May, June. When June came, the hand underlined June again and tapped it three times.

Then, in the vision I saw people marching, I saw protest. I saw people were in mass, I saw lines going into hospitals. I saw typical medical doctors with needles or syringes, I saw people on ventilators I saw people who were very, very sick, very very ill. I saw newspaper headlines trumpeting thousands of people getting sick I saw ambulances, just flying down roads, and then I saw cities on fire.

I told several men in my church about this and I can confirm who those men were and they’ll confirm what I’m telling you is what I told them.

I saw absolute chaos and the other thing I saw was vultures flying over large cities, not just the ones that were burning but I saw those was flying over the cities, and I saw smoke rising and I saw I saw people, fearful I saw people terrified I saw people inside their homes, is looking at the windows, the crimson windows with guns in their hands because it was absolute fear.

January, February came, it didn’t seem too much. I reminded the men of the dream and then in March term COVID-19 hit and things started shutting down. Churches were shut down, business were shut down, the economy shut down.

Then we began to see the protests, starting in March, in May in Minneapolis and those things began to go on. So where we are at the end of the primary election here in Kentucky. Now there’s talk of more shutdowns.  I just heard the governor talk about schools opening back up and things of that nature.

And it’s not just my job it’s something that I enjoy doing. I love doing and I’m very interested in the news around the world. I read 40 newspapers a day from all around the world. I keep up with news in other parts of the nations, better because sometimes….it’s hard to know who to trust.  I get news from all over the world, all around the world from both liberal and conservative sources. I’m very well read and very understanding of how nations work, and I travel quite a bit.  I’m not just making these things up I can confirm what I have said.

With that in mind, on Monday night I had another dream.

It woke me from my bed.  I made notes about it.  I shot some video of myself just making sure to remember.

Here’s what I saw.

I saw a calendar. Start with the calendar. As I was having this, the calendar was up, a white figure appeared.  To me, it was a representing God the Holy Spirit, something pure, something righteous, something true, something Holy because there was nothing sinister about it.  Nothing evil, but I heard the voice say, “part two, part two”.

I saw June, go, I saw July. I saw August, and then I saw September, and I saw the finger underneath the word September and I like like emphasizing it and tap the three times.

Then I saw October come up, and then I saw November and this is when it got real to me in the dream.  I think the intensity for me…  when I woke up my heart rate was about 180.

So that was Monday night, and I woke up not feeling very well at all I was up during the night not feeling well.

But anyway,…  The minute the finger underlined November three times instead of tapping it, I saw a fist ball up and it hit the calendar.

And literally, the calendar exploded into the wall, the numbers seem that they were 3d and they were falling everywhere.

There was a cloud of chaos that started in there. The next thing I saw was I saw I saw armed protesters. I saw fighting in the streets, I saw people pummeling one another.  I saw businesses shuttered and shut out.

I saw schools close. I saw school rooms with cobwebs hanging in them and like things like papers falling off the wall and posters…  like no one had been in them for months.

I saw banks.  Bank buildings with the roof being taken off.  It looked almost that alien abduction because money was flying through the roof into some type of like a vacuum cleaner.  It sounds kind of strange, but I was watching wealth, just being taken. I saw politicians in back rooms, making deals with people. Patting people on the back and laughing and smiling and smirking.

That has been something that I have heard for almost, almost seven months now.  Starting, …  once we get to July, it’s gonna be seven months.

I’m not claiming to be a prophet I’m not claiming proclaiming … just, … let’s see what happens in November,… through November and see if I’m right about this. But I know when I hear God’s voice, I know, I know what God’s voice sounds like to me.  I know when He speaks. I know when I had a dream that I know is Him.  The things that I am saying, I don’t say this to scare people but I say this to warn people that there are some pretty sinister things coming down the pike, and not just for the lost but for God’s people as well.

The second dream I had last night,… It woke me up.

In this dream. We just had a yard sale to help fund team going to Ecuador this next year.

I saw the sign and registered in mind.  I walked on in, and the president of the local bank was at the teller station. She was taking care of business.

And I said, I need to get $10 in quarters for yard sale and she said, I’m sorry, but the US Mint is no longer making currency or making change… ( like pennies nickels dimes quarters half dollars), “We’re not doing that anymore”,

“well what do you mean”

She said, ” prepare for hyperinflation and just charge $2 “

Then she said to me in the dream… Oh by the way, $1 and $5 bills will follow soon after that.

I wrote these things down.

I have never gone on video and recorded the dreams that I’ve had and I hesitated to not do the one I had back in December, but everything I saw in that dream in December, came true between March and June when in the dream I was shown March through June.

I don’t think I would be doing anyone a service if I don’t show what I saw in these dreams and visions.

I believe that we’re going to see not just going to see a second huge wave of Covid between September, October, November.

We’re going to see major things with the elections,…

We’re going to see major chaos in our country.

We’re going to see troops in our cities.

We’re going to see the protests get even worse,

We’re going to see which can only lead to civil war in this country.

And so for my friends that are believers, … I’m just going to show that what I think you need to hear.

First of all, you need to be preparing food.

Make sure you’ve got alternative forms of currency like silver or gold or whatever.

I believe you need to have an ample supply of both guns and ammunition. That’s not just the Second Amendment fan of me coming out, that is the things that we’re seeing.  They are talking about defunding the police. That means one thing … you’re on your own a lot of areas.

I also believe you need to be praying like you never prayed before.

I’m not saying, get off the grid, and I’ve never ever said anything like this in my church. I have said I believe that this could happen but I’ve never done what I’m doing right now.

I’m telling you that between September and November of this coming year.  And by the time we get to November and nothing’s happened …  man you call you call me on this and say .. you are an absolute idiot and a fool for saying those things.

I realize I’m responsible for what I’ve spoken. I also know what I sense and I know the Holy Spirit’s voice enough to know that what I’ve heard.

I believe is going to happen.  What I heard in December happened between March and June.

not because I’m a prophet because dreams have a prophetic edge to them sometimes I’ve been doing a whole series on dreams and visions I’m gonna finish that series up tonight on my our church and going to talk about why dreams and visions are literally an extension of the spiritual gifts at first Corinthians chapter 12 because we’re a wisdom or a knowledge the servant all those things are required for dreams and I pray Lord show me what these things mean that I have seen show me how to interpret them and what they are and right now as I speak this it is it was June 24th Wednesday night at 5:30 p.m. in Burkesville Kentucky I’m in my office at the church Limor ministries in Birch Hill Kentucky

How can God allow such catastrophic events? – Roxanne

Luke 6:38 NLT
Give, and you will receive. Your gift will return to you in full-pressed down, shaken together to make room for more, running over, and poured into your lap. The amount you give will determine the amount you get back.”

If you are uncomfortable with those options. You can send a check payable to Jonathan Theiben